I found this timeless prayer in a temple during a bar mitzvah service in 1990. Losing interest during a long talk by the rabbi, I picked up the prayer book and randomly opened it. At the top of the page was this quatrain;

Send help to the falling

And healing to the sick

Bring freedom to the captive

Keep faith with those who sleep in the dust.

I found that these lines are part of a standing prayer called the Amidah. It was written in Jerusalem 2,500 years ago in response to the destruction of the First Temple and the deportation of the Jews to Babylon.

Why are these social ills still unresolved?

During the next five years, I realized making a large painting for each line was my standing prayer.

View a 3-D tour of our November exhbitions

Donald Cole turned 91 years old this year with an artistic career spanning over 60 years. He has lived on Vashon Island since 1994.

His bright colors and weathered surfaces are hallmarks of his work, but each painting is purposefully a technical departure from the next, alluding to the artist's desire to continually push his own boundaries. Cole playfully explores the possibilities of materials to express the experience of beholding the awe inspiring world. Cole reflects, "the appearance and the content of my work comes from several sources: the joy of painting and creating, and my own social, psychological and ethical responses to the world as I live and view it."

Born in New York City, Cole began his painting career in the hotbed of creative innovation that was New York’s SOHO of the 1960’s. While Pop Art and Minimalism were in the forefront of the art scene then. It is there that he began his lifelong use of color and texture to explore both political and cultural context in his work and developed his interest in non-Western imagery. As his art career gained momentum in the 1970s amidst the Pop Art and Minimalist movements, Cole explored independent directions in abstraction. Rejecting artwork that responded only to formal concerns or trends, Cole expressed political and cultural content through color, brushstroke, and texture.

Cole is the recipient of multiple awards and grants, including two from the National Endowment for the Arts, and his work has been exhibited abroad through the Art in Embassies program of the U.S. State Department. His work has been covered in publications and papers including Art Forum, Art Magazine, the Seattle Times, and many others.

Donald Cole is represented by ArtXchange Gallery in Seattle, Washington. 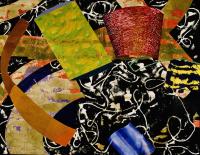